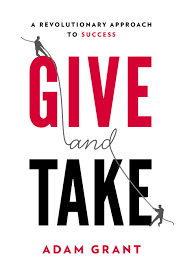 Give and Take by Adam Grant is subtitled 'A revolutionary approach to success' - I became interested in the book after reading about Grant in the NY Times.  Grant is a professor at The Wharton School and has done extensive research on people's relationship, networking, negotiation and leadership styles, and found that in our interactions with others, people tend to operate as either givers, takers or matchers.  And while some givers burn out, many incredibly successful people in many fields are also givers.

This book highlights the key differences between burning out and achieving success, and has introduced me to some of my new favorite concepts:

1) pronoia - it's the opposite of paranoia and can be defined as "the delusionial belief that other people are plotting your well-being or saying nice things about you behind your back" - sounds like a great attitude to bring into any casting situation to me.

2) expeditional behavior, a term from the National Outdoor Leadership School, which trains NASA astronauts, among others, and means putting the group's goals and missions first and showing the same amount of concern for others as you do for yourself.  This is the exact name for what I'm trying to cultivate in any group of students who are working on a show together - we put the play and the story we are trying to tell first.

There's even more interesting and helpful thinking in this book - ideas about how to process the successes of peers or co-workers, and lots of ideas about networking and cultivating relationships - two big keys for any theater professional.

On a totally different track, for theatermakers and others who want an in depth look at the women of the War of the Roses, Blood Sisters by Sarah Gristwood shines a light on the lives of Marguerite of Anjou (the wife of Henry VI), Elizabeth of York (mother of the 'Princes in the Tower') and 5 other women from both Team York and Team Lancaster.  If you're heading into production on a Shakespeare history play, learning more about the details of the day to day lives of these women and how they leveraged their limited power in their relationships with powerful men is pretty fascinating reading.

I'm also very excited about a project that is coming up at the end of June.  I'm part of an event that will not only showcase approximately 30 women theater artists, the majority of them members of Actors' Equity, but will also raise money for a non-profit called SF Safehouse, who provide 18 months of housing as well as lots of other varied support and resources for homeless women leaving prostitution.  The public portion of the event is an evening of short original plays, and takes place on Monday June 24th.  Ticket info is here and you can also find event details on Facebook.
Posted by Unknown at 6:00 PM No comments:

I've tried to write a post on this concept and how it holds actors back several times over the past year, but once again, Bonnie Gillespie hits the nail on the head in a way better way than I ever could.

And then set aside some time to wade through the archives - she's one of the best resources out there for an on-camera actor.

And Bay Area folks - have you taken a look at Apple Box Studios Films yet?  A new by artists for artists company with a video creation focus - they shoot auditions, edit reels, and put together websites - I haven't had a chance to take advantage of their services yet, but I'm sure I will soon!

So there's this Japanese business/industry idea called kaizen - it's the principle of continuous small improvements, constant tweaking of routines for greater efficiency, maximum productivity, etc.  The brilliant documentary Jiro Dreams of Sushi is all about kaizen through and through (but a warning for the vegetarian faint of heart - lots of fish carcasses)

I've got my own kaizen going around auditions.  It's yet another way that I stay conscious about what aspects of an audition I have control over and which ones I don't.

And I really am digging this recent improvement to my audition routines: the night before, I make a timetable.  I start with the time I'm scheduled, and then work backwards.

It keeps me from stressing when I'm getting ready (what time did I need to get on BART again?), makes sure I don't forget anything, and makes sure that I'm doing productive things to get ready (like a vocal warmup) instead of getting stuck on the social medias. Because I do it the night before it also means that I sleep better.    Timetables are definitely a keeper.  For now anyway...
Posted by Unknown at 4:00 PM No comments:

Email ThisBlogThis!Share to TwitterShare to FacebookShare to Pinterest
Labels: auditions

Counting Actors and the local/non-local issue

When I first envisioned the Counting Actors project, I added the question of whether actors were local or not partly because I was afraid that 'just' tracking gender wouldn't get enough people interested.

Fast forward just under two years, and it turns out many many people are interested in tracking gender of actors, writers and directors.  Theatre Bay Area magazine has even published an article about my findings, focused on the gender portion of this study.

In this post, I'm taking the exact same plays used for the TBA article, listed here, and looking at the numbers in regards to local and non-local hires.

I include 235 plays in this count, rather than the full 236.  There was one play that I couldn't find out what kind of union contract it had used, even after a conversation with the LA Equity office, who had to admit that the show had slipped through their fingers.

Here's what I found in table format, broken down by type of contract, with totals at the bottom.

235 plays used 1829 actors, and 677 (37%)  of those actors were union members.  Of that same total, 200 actors or 11% of the total were non-local.  The line that probably holds the most interest for the union actors reading this is the line that breaks out contracts with health weeks.  Those 132 shows employed 1074 actors, 588 (55%) of them members of AEA.  188 of the actors working on those shows with the high level contracts were from out of town.  They made up 18% of the actors who worked on these shows, and 32% of the actors who worked on contracts with health weeks in the San Francisco Bay Area.

When is it okay to talk about body parts?

Let's say you live in San Francisco.  And let's say you have a female friend who is a great chef.  We'll call her Josie.  She has run her own restaurant, and is currently adjunct faculty at City College in the restaurant and hospitality program.  In her course, students run a mock restaurant  - they staff every position at that restaurant from chef to line cook to host to server to busser.  And, for 3-4 weeks, their restaurant is open to the public 3 nights a week.

Josie is really proud of the work her students have done - she uses facebook, twitter and whatever other social media she's good at to invite her extended network to come to the restaurant.
She says things like 'the food is great!' and 'the service is exceptional' and 'the men are all wearing tight pants and their butts look a-maz-ing!'

What's your reaction in this hypothetical scenario?  Is it 'Awesome! Nothing like some well formed glutes to get the ol' salivary juices flowing! I'm booking a table for tomorrow!'  or is it 'hey wait a minute - aren't you their professor?  Josie - doesn't talking about your students bodies in this way violate a code of ethics or professional conduct or something?  As your friend, you might not want to announce that tight pants/amazing butts thing on a public forum.'

I'm hoping it's something along the lines of the 2nd response.  I'm aware that parts of the first response may also cross your mind.  I know that a lot of us like looking at well formed bodies, and that we sometimes discuss those well formed bodies with our friends.

Here's the key differences though. 1) public forum and 2) professor student relationship and 3) did I mention public forum?

Here's a real situation - there's a community college in the Bay Area, outside of San Francisco, currently running a production of a swashbuckling play with sword fights, and from what I can gather on public forums, costuming from the era of the piece, so that means women in corsets and lots of cleavage.  The director of the piece, who I don't know personally, but we've got some mutual facebook friends, is adjunct faculty at this community college.  On a facebook group, he has described his piece thusly: 'Boobs and Swords! Send me an haiku about swashbuckling and win two comps! (limit 10 pair per performance. Ten pair of what? Comps. Pervert.)'

Some people have said 'so what?' to this whole thing.  Others have sent angry emails to the director's supervisors asking for him to lose his job.

Where do you fall on this spectrum?

I'd love to hear answers to those questions in the comments.

Before you read this month's list - a few places to get even more Counting Actors.
1) the May/June issue of Theatre Bay Area magazine - yours truly has an article on p.20, with cumulative data for over 230 shows, as well as reactions from members of the local theater community to put the whole thing in context.  No online link yet, but I'll share when I've got it.
2) DIVAFest - on May 25 from 3-6, DIVAFest hosts a two part symposium event where I'll be talking about findings and patterns in the Counting Actors project along side other artists who are looking at ways to address gender parity.  I would love to see you there!


April's Counting Actors features 15 shows and brings the total count to 262.  This project began in June 2011, and all past posts relating to the topic - the monthly totals, the posts w/aggregated information - as well as info on how to contribute info on a show you've seen or been part of can be found at the Counting Actors Page.

Thank you to everyone who contributed statistics for this month's count.  If you are in a show or see a show with performances in May that hasn't been counted yet, please go to the Counting Actors page for directions on how to submit the info.  Contributors for this month include audience members, cast members, writers.  Thank you to Phoebe Moyer, Pidge Meade, Sheila Devitt, Annie Paladino, Amy Clare Tasker, Lily Tung Crystal, Tiiu Eva Rebane, Martha Richards, Anne Hallinan and Jenn LeBlanc.

Thank you for sharing and talking and posting about what you're reading here - please talk in the green room, dressing room, audition room and post-show bar, and share, tweet, update, comment, like, + on any social media of your choice. #femtheatre is a great twitter hashtag to use/search as well.