I wanted to point out some of what's new in the blogosphere about gender representation in theater around the world.

1) Australia's official arts funding body, the Australia Council for the Arts (kinda like an Australian NEA), has just published a report called Women in Theater.  This report, a first of its kind in Australia, offers ' a detailed analyis of the representation of women in creative roles in the Australian theatre scene from the early 80s to today.' The creative roles the report looks at are directors, writers, as well as artistic director, general manager and board.  It includes not only the numbers and how they've changed over time (not much), but also an attempt to diagnose some of the symptoms as to why female representation is low, and offer solutions.   It's worth a read.  A brief intro, with links to different ways to read the report, is here.

2) If you've been under a rock, Minneapolis's Guthrie is under a ton of flack for the lack of diversity in the directors and writers chosen for their 50th anniversary season.  Minnesota Public Radio has a great article summing it all up here.  And the Guthrie's season announcement is here.

A quick reminder - if you're working on a show or have seen a show with performances in April, take 5 minutes and send an email to me for the Counting Actors project.  With your help, I'm tracking some key questions relating to gender, union status and local/non-local hiring of actors, writers and directors in Bay Area theaters.  So go to this page to learn more, and to learn how to send in some stats.

Posted by Unknown at 6:25 PM No comments:

Recently, I've been contacted by various indie filmmakers interested in me for their projects, but I've had to turn down the auditions because some of my warning flags were raised.  I thought I'd write a post about those flags, but wanted to check my archives to make sure I wasn't repeating myself.

And voila: Dear Low-Budget Independent Filmmaker - the post I wrote EXACTLY ONE YEAR AGO TODAY.

The most important point to reiterate:

"What you need on set is a well-prepared actor.  If you don't let me have sides in advance, how can you assess my skills at preparing?"

Posted by Unknown at 7:30 PM No comments:

The dream team of the British Museum and the BBC are back again with another awesome series!  They're calling it 'Shakespeares Restless World' and it's a series of twenty programs, each running approx 15 minutes.

It follows a similar format to the History of the World in 100 Objects series that I wrote about here.  But this time, each program picks an object from the British Museum's collection and uses that as a jumping off point to explore a specific aspect of the history and culture of Shakespeare's England.

Already pretty awesome, but then they add in a little bit of Shakespearean text analysis on the theme at hand, and my teen Shakespeare geek heart goes pitter pat.

You can find the programs detailed here.  As of this writing, the first five programs are online, and they'll keep adding new ones M-F through May 11th.

Huzzahs all around for Emily Weak, my sister and librarian supreme, who tipped me off to this new series.
Posted by Unknown at 2:00 PM No comments:

So there's a certain kind of audition out there that I call 'guy with the shirt'.  These auditions are for commercials, for industrials, occasionally (in the Bay Area at least) for film and TV.  The character has no lines, simply a bit of business or a reaction.  They're angry about the network crashing, or ecstatic because it turns out it's raining money, or relaxed for the first time in years.

In other words, it's Acting 101 - reacting to a set of circumstances.  It doesn't take a Streep or an Olivier to nail the acting skill required.   You just show up at the right place at the right time, doing your best to look like the type they want - for me this is usually either Business Lady (I wear a suit) or Mom (I wear a solid colored knit top from H&M with either jeans or khakis).  I'm just a typical guy with a shirt.

GWTS auditions aren't about dazzling them with your acting skills.  You can't.  You're just playing a reaction.  GWTS auditions you'll either book or you won't, depending on whether or not you're the flavor they're looking for - a flavor that has to blend with all the other flavors they're using on the project.

So instead of showing off skill (and focusing on how I'm doing and working hard to do the audition 'right', what ever that is), I'm learning to show off my flavor.  My focus is on making a connection in the audition room.  Really listening and responding to direction, asking for clarification if I need it, and being as authentic as I can.

And knowing that if I don't book it, the reason has nothing to do with my acting skills, and everything to do with subjective things related to what kind of guy with the shirt they need for this one.  And, releasing the idea of 'being a good actor' and switching instead to 'being an authentic person interested in connection'  has led to me having more fun at these types of auditions, and feeling better about how I'm doing.

Posted by Unknown at 6:52 PM No comments:

Who has two thumbs and a lot of recent press time?  um, see the title of this post!

1) My article Equity: Year One is now available on the Theatre Bay Area website.  If you didn't already read it in the print edition of the magazine, let me know what you think!

2) Rachel Swan of the East Bay Express quotes me in last week's cover story, The Shrinking Stage, and mentions the Counting Actor's project in an article from a few weeks ago, that you can read here.

3) Playwright Lauren Gunderson has an article on onstage gender equity in the Huffington Post, and includes a shout-out to Counting Actors as well!  Take a look!

Thanks to the writers and publications for including me and the blog in their writing!
Posted by Unknown at 6:00 PM 2 comments:

The Art of Fielding 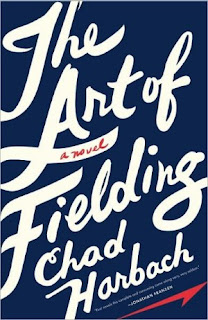 It's a novel about college baseball players.  The main character is a shortstop and a significant portion of the action centers around games, practice, training and players on the team talking with each other.

Yet in this debut novel by Chad Harbach, I found some great images and metaphors for the actor's day to day experiences.  I'm having trouble writing much more without giving away big spoilers to what happens.

Here's an image that sticks with me - this shortstop character, Henry, has a post-game ritual.  He goes onto the field w/a coach and a first baseman and fields 50 ground balls.  The coach hits them to him, and he catches them and throws to first.  50 times.

And his focus, his interest, his reason for doing it, is for the action.  For the love of scooping a baseball off the ground and throwing it to someone else.  It's not about the result, about what happens after that, it's just about doing that one thing, doing it to the best of his ability and then doing it again.

Sound familiar?
Posted by Unknown at 9:23 AM No comments:

Email ThisBlogThis!Share to TwitterShare to FacebookShare to Pinterest
Labels: the actor's life

Here are the stats on the 8 shows counted in March.  To learn more about this project, including how to contribute, visit this page.  To read all the posts in this series, going back to June 2011, go here.

Look for April stats between May 1st and May 5th.  And if you're working on a show or see a show with performances in April, please take a moment to share the info.

Check it out!  The East Bay Express has an article about gender imbalance and local theater.  Thanks Rachel Swan for mentioning the blog in your article!